In a year that has seen Philadelphia lose 1,864 people to COVID-19 and more than 400 to homicides, the Bicycle Coalition of Philadelphia on Wednesday shared concerning data on the city’s traffic fatalities.

There have been 120 traffic fatalities reported in the city this year, up from 75 at the same time in 2019.

The numbers represent a 60% annual increase and the deadliest level of traffic violence since 1997.

With the exception of ATV riders, every category of traffic death has shown a sharp increase in 2020. 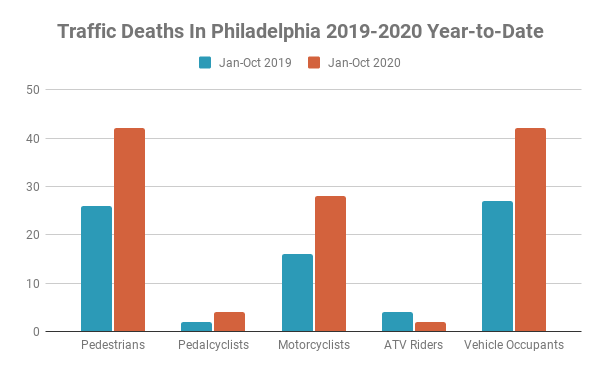 Pedestrian deaths currently stand at 42 this year, up from fewer than 30 at the same time last year. The number of cyclist deaths has more than doubled and motorcycle crash victims have increased by 75%.

“Aggressive driving appears to be a factor in many of these tragedies,” the Bicycle Coalition said in a news release. “Hit and run drivers killed 24 people this year, compared to 10 at this time last year. There were 29 single vehicle crashes, compared with 17 for all of last year. Several police investigations noted drivers and motorcyclists traveling at high speed and losing control.”

U.S. traffic fatalities also have been trending in a worrisome direction this year. While the absolute number of crashes tracked by the National Highway Traffic Safety Administration is down modestly compared to 2019, the percentage of accidents relative vehicle miles traveled is up during the COVID-19 era.

Prior to this year, the country had reached a five-year low in driver fatalities. Pedestrian deaths, however, have been on the rise for much of the last decade, according to a report from the Governors Highway Safety Association.

These trends have been much of the impetus behind the Vision Zero coalition, whose commitments the city has adopted in an effort to reduce traffic fatalities to zero. Projects such as the recent reconfiguration of 22nd Street and the upcoming redesign of Washington Avenue are developed with Vision Zero goals in mind.

The Bicycle Coalition analyzed Philadelphia’s traffic fatalities by mapping them against roads identified in the city’s High Injury Network and census tracts noted as above average by the Delaware Valley Regional Planning Commission’s Indicators of Potential Disadvantage measurement.

Many of the traffic deaths in Philadelphia this year occurred in these high-risk areas.

“Like deaths from gun violence, airline crashes, opioids, fires and COVID-19, the only acceptable number of traffic deaths on our streets is zero,” the Bicycle Coalition said.

Thu Nov 26 , 2020
DUBLIN, Nov. 18, 2020 /PRNewswire/ — The “Global Cancer Immunotherapy Market Analysis & Forecast to 2025” report has been added to ResearchAndMarkets.com’s offering. Within the cancer therapeutics space, which today is worth over $160 billion globally, immunotherapeutic drugs have gained worldwide acceptance. This is because they are targeted therapeutics that […]