Automotive display systems are becoming a very important aspect of any vehicle’s interior. As user experience becomes a vital aspect to overall vehicle experience, automakers are tasked with managing flexibility, design, performance, and content to meet consumer expectations all while keeping costs down for their volume platforms. Displays have become […]

Automotive display systems are becoming a very important aspect of any vehicle’s interior. As user experience becomes a vital aspect to overall vehicle experience, automakers are tasked with managing flexibility, design, performance, and content to meet consumer expectations all while keeping costs down for their volume platforms.

Displays have become an everyday reality in people’s lives through their smartphones and tablets, raising expectation levels for what consumers see in their car. Displays offer a familiar and flexible interface that can manage a wide array of content constantly being added to the automotive value chain in a way that generally speaking shouldn’t require a steep learning curve for a new consumer. IHS Markit tracks the automotive display market closely and delivers both monthly model-level display forecast updates and regular reports covering different applications of displays in the car, among other technologies.

According to the IHS Markit Model-Level Automotive Display Forecasts, a combined 98 million Center Stack, Instrument Cluster, and Head-Up Displays entered automotive production in 2016. By 2023, that number is expected to reach nearly 160 million units annually. This dramatic proliferation of displays is driven by consumer preference and content increases, but the growth isn’t limited to volumes. The average size of a Center Stack Display in 2016 was 6.8 inches. In 2023, that number will expand to 7.7 inches, driven by both larger entry level displays in the 7.x – 8.x inch range and growth in 12.3 inch systems in new segments. During the same timeframe, a large number of these displays will offer capacitive touchscreens that better mimic the performance offered by smartphones. 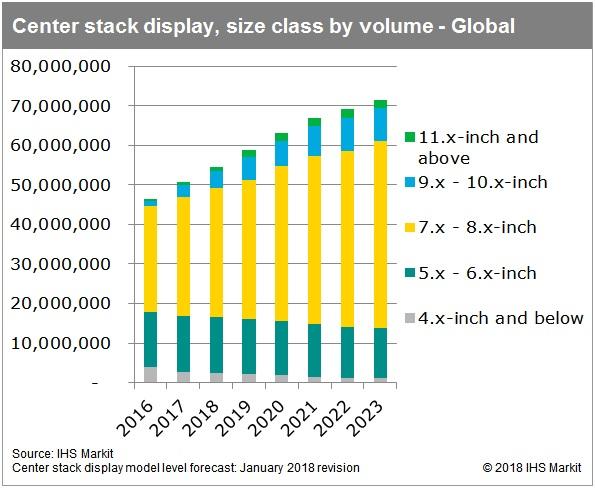 Instrument Clusters will see similar growth, as more and more automakers are introducing a display alongside traditional analog components, or are removing those mechanical parts entirely to rely solely on a display. More than 80 percent of all Instrument Clusters will have at least one display by 2023, an increase from less than 60 percent in 2016. This trend is driven in large part by the increase of safety content in the vehicle, and the need to deliver that information to the driver. The average size of an Instrument Cluster Display will reach 5.8 inches in 2023, up from 4.4 inches in 2016.

The last of the primary displays is relatively small today, but is growing at a steady rate. By 2023, Head-Up Displays will boast a 12 percent automotive penetration rate, more than tripling 2016’s volume to reach over 11 million units globally. Wider field of views, increased content availability, and smaller component packages are all being developed to meet the sharp consumer demand felt on dealer lots globally.

All of this translates to an incredible transition in the vehicle’s interior and how the vehicle communicates to the driver or passenger, and vice versa. Beyond that, these trends represent an incredible opportunity for suppliers in this space. By 2023, these three display systems alone will represent over $23 billion in tier one to OEM revenue, according to IHS Markit forecasts.

Display Mirrors offer the potential to become the fourth primary display across multiple applications. Rearview Display Mirrors, already in production across GM, Nissan, Toyota, Jaguar Land Rover, Subaru, and others, have proven to add value to the interior by offering wider fields of vision and unobstructed views behind the vehicle. Strong consumer response and a looser regulatory environment have paved the way for future growth as new automakers continue to announce their initial adoption of the technology.

Side View Display Mirrors face a more complicated future, as consumer adoption and global regulatory environments prove more challenging for shedding the traditional exterior wing mirrors. Even still, initial production is expected soon in large part to take advantage of the drag efficiencies that can be gained by removing those protrusions. The IHS Markit Camera and Display Mirrors Report details the drivers behind both of these mirror applications, the regulatory environment, and forecasts their future in the marketplace. By 2025, Rearview Display Mirrors are expected to reach 1.8 million units annually. Dedicated Side View Display Mirrors are expected to be more niche in that timeframe, reaching 420,000 units. 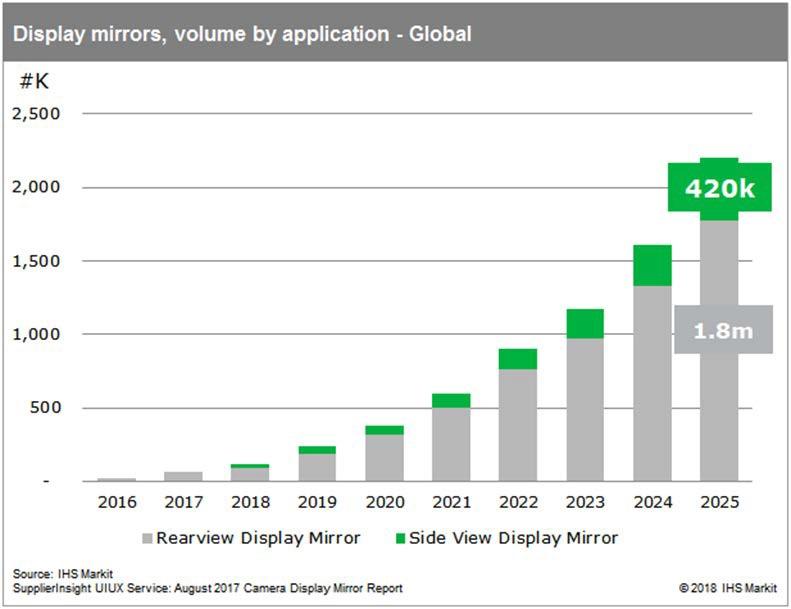 In-vehicle display investment isn’t stopping at larger screens. The coming decade in automotive will see the introduction of AMOLED and curved display panels, augmented reality HUDs, and dedicated displays to replace exterior side view mirrors. This time will also see a proliferation of rearview display mirrors and cockpit domain controllers that will, in part, consolidate the ever-increasing amount of ECUs that each of these display systems will bring.