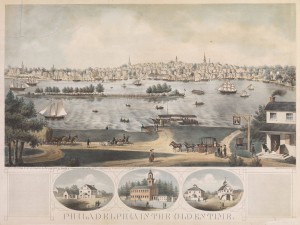 by Dovie Salais on May 4, 2020 in Transportation

For more than three centuries public transportation has helped both to shape and define the Greater Philadelphia region. Befitting one of the world’s largest cities, Philadelphia and its hinterland have been served by a bewildering array of transportation options, and these vehicles and routes have helped to define the extent of the region.

Public transportation – consisting of vehicles that operate on fixed routes used by the public – began in the region in 1688 with a ferry between Philadelphia and what is now Camden, New Jersey. This early line, though not a success, spawned additional ferry service and quickly established a Philadelphia hinterland in New Jersey. It was an early example of land outside Pennsylvania being tied economically and culturally to the city and established a precedent for southern New Jersey to develop in association with Philadelphia.

It would be more than one hundred years before local